So this song goes waaaaay back. I started to write the song “David” during a breakup, which I clearly didn’t take very well. I was pretty bummed about it and it affected everything in my life. I was depressed and angry. I couldn’t sleep well. I made bad food choices and was distracted at work. I needed something and I wasn’t sure what.

So, I invented a character that this was happening to (instead of me) and imagined myself giving this character a pep talk. It’s half hearted and ineffective but it was an attempt to reframe the situation and do something creative with it.

The name David was not significant to me. It occurred to me later, however, that the girl from the breakup had a brother named David (whom I’d never met) so there may have been a subconscious connection there.

I was, and always will be, a huge Harry Chapin fan. It started in 8th grade, when I went to sleep every night listening to the Gold Medal Collection on my old Aiwa boombox. I don’t remember where, but by 2001, I’d seen video of Harry playing “Cat’s In the Cradle” and noticed he was capo’ed at the 8th fret. I thought it gave the acoustic guitar part a nice delicate feel so I journeyed up the neck with this one after it was written. I eventually settled on 7th fret so I could play an open chord G chord and it would translate to a Concert D. That meant I could use a harmonica eventually.

I remember being proud of the contrast in the duration of chords between the verse and the chorus. Each chord got 2 bars in the verse but only 1 in the chorus. Picked up the pace and made it “go somewhere,” a goal I have tried to achieve in everything I’ve written since.

This first version is probably my second attempt at recording anything. I never recorded with a standalone device like a 4-track. Around this time, I had my eye on a Boss BR-8 but I never coughed up the money to buy one. Instead, I recorded this little ditty in on a Gateway laptop using Cool Edit 2000 software. I used the stock sound card and a 58-style dynamic mic for guitar and my doubled vocals. I’m sure it was my Taylor 815 for acoustic and there’s a cool little pad sound I used a vintage Oberheim OB-8. This was all done in my Citrus Heights, CA apartment in the summer of 2001.

Believe it or not, but I wasn’t totally satisfied with that version. When I returned to Chicagoland in 2002, I started a band with Tari Follett called Righteous Truth Pail, although we eventually changed our name to Reckless Truth Pail out of concern that the public would think we had some religious affiliation. I believe we met off a Craigslist Ad. She had a handful of wonderful originals, an amazing voice and I brought my songs to the party.

This is the first time the song had a written intro and a long solo outro. Was very proud and excited about both of those touches. I can remember also playing this for people to get a reaction and one particular response stands out. I don’t remember who it was, but as I played it, there response was, “she’s really good. she should be the lead singer.” Ouch! I admit it wasn’t my best performance and singing probably isn’t my strongest musical skill but, even though I laughed it off, the idea that I’m not a good enough singer still occurs to me.

While I was completely satisfied with how the last version of David came out, I started a new band called Superbullet in 2009 and we needed songs. That meant, revive good old David and give it a new twist. This time, we recruited another singer, Jeff Claypoole to take over the vocals. He did a wonderful job and played acoustic guitar while Matt Stankieiwicz played fretless bass and I played mandolin. Jeff clearly had vocal training and control, which made for a fun alternate take.

Just like in 2009, new bands need material so out comes David again. We had a full album of songs to play but, as we were pretty aggressive with our booking, we had a few 2+ hour gigs that required us to play all of that and more.

Even though the song has had a lot of mileage on it, I had a great experience relearning it nearly 20 years after it was written. The best part was relearning the outtro guitar solo, which I think I remembered, note-for-note, by the second or third time around. Finding that it was still buried in my subconscious muscle memory is one of my favorite musical moments as a performer and songwriter. 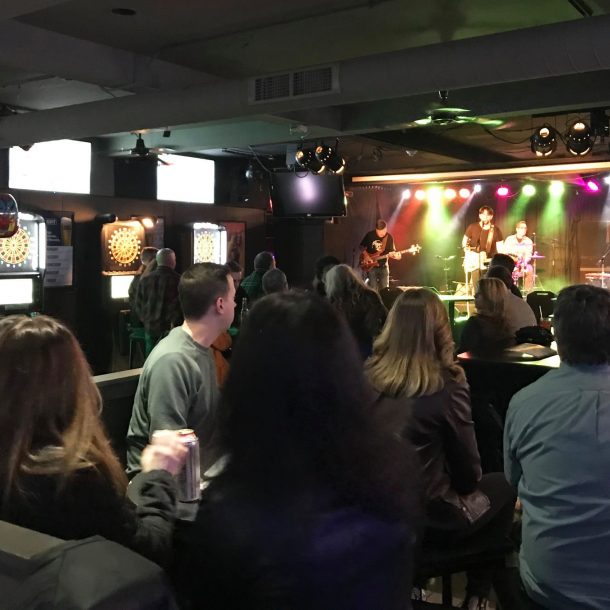